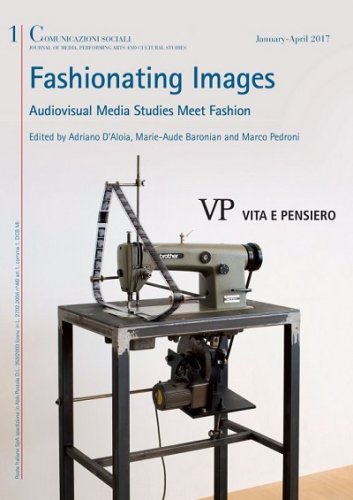 Over the past decades, fashion has acquired centrality in social and economic processes for its capacity to penetrate and influence both cultural production and identitarian practices. The proliferation of media objects such as fashion films, makeover TV shows, fashion blogs and vlogs has shown how prolific the encounter between fashion and audiovisual media can be. The aim of this special issue is to explore this intersection and, consequently, the cross fertilization between fashion studies and media studies, with particular regard to audiovisual media, such as cinema, television, advertising and digital video. The essays interrogate how the combination of fashion and the moving-image enables us to reflect upon the ubiquitous presence of fashion in our media-saturated landscape, and at the same time upon the ubiquitous presence of media in socio-cultural practices and industrial processes such as fashion. Questioning the encounter between audiovisual media and fashion brings an elective affinity to light. If fashion is central to cinema and television and gives rise to a wide range of new genres and formats, it also impacts on the forms of representation and expression of identity and the body via personal and social media, according to the prevailing customs and tastes of our place and time. This encounter is a terrain of experimentation with new trends in the media experience – ones that rely on performativity and the enhancement of the viewer/user’s agency. After all, audiovisual media are similarly about constructing a fictional (and entertaining) world and actively and creatively inhabiting it as an essential part of the actual world.